🆕 Since May 2019, Eurolines has been bought by Flixbus. Eurolines buses will progressively join Flixbus' network all over Europe.

You'll be able to see which amenities are available for each individual departure when you purchase your Eurolines bus tickets online on Busbud.

Created in 1985, the Brand name Eurolines groups 29 independent bus companies operating together Europe's largest regular coach network. This network connects over 1000 destinations, covering the whole of the continent, including Morocco. 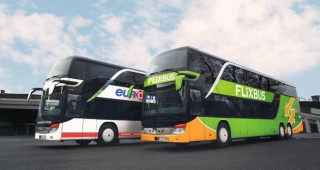 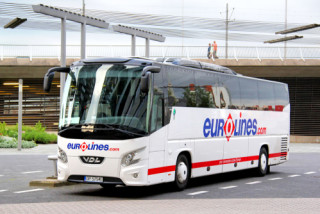 User reviews from travelers who booked their tickets with Eurolines

February 26, 2020
I did journey Lisbon by Eurolines Bus first time bus seat is not clean and mobile charger doesn’t work I have asked ladies driver she was very rude so I never and ever ride euroline bus it was service panic.
Eurolines

January 21, 2020
I would not recommend Eurolines to anyone. Our bus left Braganca 20 minutes late, the driver was not very helpful at all. I was travel with my 5-year-old daughter and there were not 2 seats together, I had to ask other passengers to move seats as the driver didn't care, he also said to buy the tickets at the same time, which I did. We had to stop in Spain for 1 hour to change buses at night time. Why there was not a direct bus to Paris from Braganca? This time around the drivers were extremely helpful. The bus arrived in Paris 2 hours late and we almost missed our bus to London. The previous time we also arrived late in Paris, missed the bus, had to wait for 6 hours at the station. The staff was awful and quite rude. We were a group of 12 adults, 1 baby, 2 toddlers, 2 kids and 1 teenager and no one offer us a coffee or water and we still had to pay to use the toilets. The only thing Eurolines did was given us other tickets to London. I would advise Eurolines to allocate a seat number to everyone and also to calculate arrivals and departures times a little bit better. I did not complaint the first time I travelled with Eurolines but the second time around I needed to say something. There's always space for improvement.
Eurolines

January 5, 2020
The drivers were really rude and shouting on the passagers and only spoked in Portuguese even when we were in Paris (And they knew how to speak French they just stopped at the first stop so for me and many others who don’t speak Portuguese it was complicated to understand their instructions). The bus was packed and extremely small we didn’t have much space. It didn’t say anywhere that it would stops so many times. I litteraly thought it would be Paris-Lisbon but the bus stopped at so many stops and nowhere on the instructions or tickets it was written !
Eurolines

December 26, 2019
They took the booking, took the money and we waited 2 hours for NO bus to turn up. We had to take a hotel for the night Disgraceful
Eurolines

December 13, 2019
It should be better to have enough break time during the journey.
Eurolines

December 11, 2019
The bus was late on arrival from departing city, late departing, and late on arrival.. Throughout the trip the seats were malfunctioning, no trash receptacles, constant abrupt braking, and generally not a smooth bus ride. All in all, it gets a 3/5. Not great, and not the worst thing ever. Tl:dr it got us from A to B, and nothing else good to say.
Eurolines

December 10, 2019
Just confusing the number of the bus and the platform.
Eurolines

December 6, 2019
The bus is a little old and the seats are very uncomfortable. The bathroom is so tiny as well.
Eurolines

December 2, 2019
It's nice but sometime the reah a bit late than schedule but I love the bus.
Eurolines

November 27, 2019
The connecting bus left 30 minutes late. Then got into the usual traffic and arrived 90 minutes later. The entire time the staff weren't talking to or updating the passengers. But worst was that for the entire trip there were no power sockets to charge electronic devices. The WiFi also didn't work.
Eurolines

November 27, 2019
I was happy with the drive he arrive in time in london
Eurolines

November 24, 2019
We lost our phone in bus and the emergency helpline person was mis-guiding us. She asked us to visit the Eurozone office which was permanently closed from October. Also she lied to us. Nobody helped us as expected and we didn't found our mobile phone. More imp is data and SIM in that phone but we lost everything. On the back of phone there was debit card also we lost.
Eurolines

November 23, 2019
Bus was very late (more than 1 hour and I did not got a message of the delay)
Eurolines

November 22, 2019
The driver from Brussels to Essen was not friendly
Eurolines

November 20, 2019
It was a pleasure traveling with Eurolines again
Eurolines

Does Eurolines allow pets on board?

No, you may not bring your furry friend with you during your bus trip. Only Assistance Dogs are allowed on Eurolines buses. ‏‏‎

Can I bring my bicycle or sports equipment on Eurolines buses?

Unfortunately, oversized luggage such as bicycles, sports equipment and musical instruments are not allowed on Eurolines buses.

Does Eurolines have a toilet on board?

Yes, there is a toilet on every Eurolines bus. We also recommend that you bring hand sanitizer, as most buses don't have running water.

Are there plugs or electrical outlets on Eurolines buses?

Yes, plugs sockets or USB ports are available on all Eurolines coaches. No need to worry about your battery life during your bus trip!

Do I need to print my Eurolines ticket?

Yes, you need to print your Eurolines tickets on an A4 white paper (no duplex printing) and present it to a Eurolines agent prior to boarding. You also need a valid photo ID in order to board the coach.

How can I exchange or cancel and refund my Eurolines bus ticket?

Tickets can be exchanged or canceled and refunded in a Eurolines agency or by phone until 6 hours before departure . The Eurolines phone number is located on your ticket.

Is there WiFi on Eurolines?

Yes, WiFi is available on all Eurolines buses and is free!

Busbud is a bus search tool - we include Eurolines routes, schedules and prices in our searches along with many other bus companies. You can compare prices, amenities and times by searching for a route. If you find a suitable trip, you can go ahead and get your Eurolines ticket from us. Note that buses sell out, Eurolines and other operators generally charge a lot more for last minute tickets or for tickets bought in person.